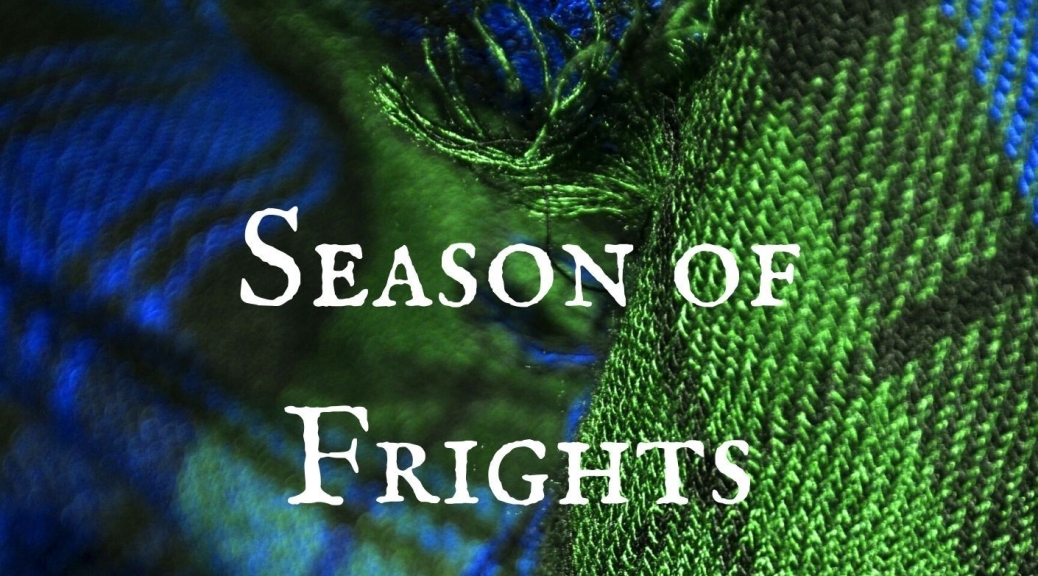 Season of Frights, Volume 2 of The Famulus series, is now available. This book went through many changes, including a title change. The original title was A Study in Emerald, which was a nod to the Sherlock Holmes book title A Study in Scarlet. Aside from a superficial reference to Sherlock Holmes, the connection wasn’t strong enough to use that title. The other issue was that there’s a Neil Gaiman story by that title, and I didn’t want to confuse people or look like I was trying to use his popularity to draw attention to my book.

In my story, “Season of Frights” is the name of Brett’s podcast, and one of the characters uses this phrase in the story. I also wrote an epigraph using this phrase and attributed it to the fictional author mentioned in the first book, Miles Denham. This quote is where Brett got the title for his podcast.

Besides changing the title I’ve been calling this book for years, I also deleted a scene that came from a project I was working on even before I started the Famulus series. I like this scene, especially the end, but I cut it for a few reasons. The chapter slowed the pace of the story, as the whole chapter was a flashback. It didn’t affect the plot at all. And I wasn’t sure if the conversation made sense. Paul Madley, the professor with whom Emerald is working on a book about the history of their town, is supposed to sound philosophical here, but I worried the scene came off as just me as the author trying to sound smart.

“The truth is,” Paul said, “we all secretly believe we’re the exception, and this isn’t real life, not really. It’s just the slow waste of time that’s supposed to be preparing us for the real Show-with-a-capital-S, but like many forms of authority, it’s ineffective and constrained by things it should be able to ignore with a flip of the good old middle finger. So, it’s not really our fault that we’re underpaid and not as attractive as we wish we were and stuck in the crappiest dying towns of middle America when we should be off on some tropical island like you see only in commercials for resorts. Do you follow?”

Emerald wasn’t as impressed as she’d hoped to be, but she tightened the corners of her mouth in a small smile and nodded.

Paul uncrossed his legs and leaned forward over the table, conspiratorially. “The real truth of the matter isn’t this entitlement we claim to have and the belief in which we keep to ourselves in varying degrees of tact, but rather the fact that we all believe we are the only one in the entire world actually entitled to it, even if we realize that everyone else believes the same thing. As in, ‘Sure, we all believe we’re the exception, but I alone am the actual only exception.’ What I’m trying to say is that it’s our nature to think we’re special, no matter what anyone tells us.”

Paul finished off the last drops of his drink. “It goes both ways.”

The more Emerald thought about it later that night, she realized the reason she hadn’t been so impressed in the first place was because she felt as though she’d heard all those things before. But Paul was one of those prophet-like people who could pluck something out of the air as if it’d been hanging over her head in a giant thought-balloon she hadn’t known was there.

I really like the last line, but I felt like I was trying too hard with the conversation. As a rule, any time I feel like I’m purposely inserting philosophical conversation into a story, I should just cut it out immediately. It’s self-indulgent and often embarrassing.